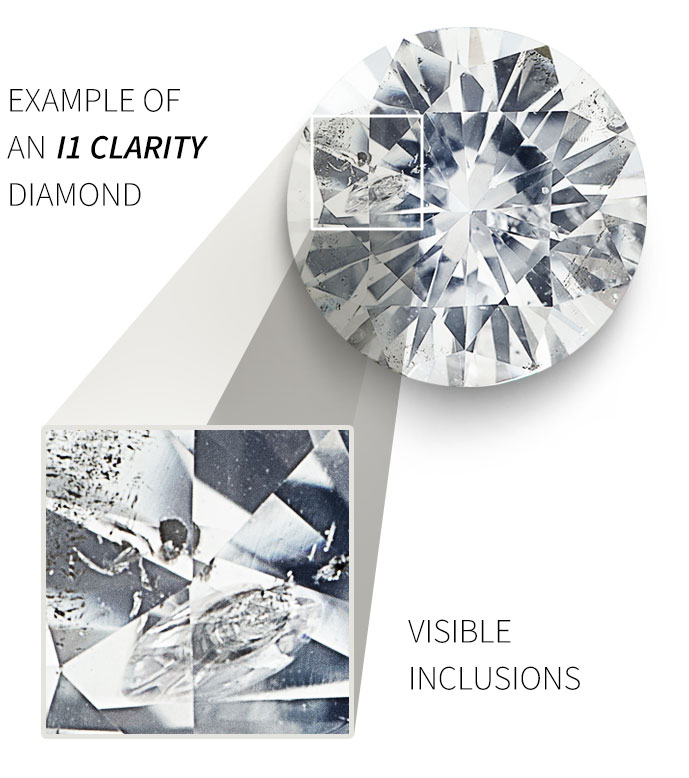 The clarity grade of a diamond is measured by the amount and size of inclusions that are found within a given diamond. These inclusions may be crystals of a foreign material, another diamond crystal, or structural imperfections such as tiny cracks that can appear whitish or cloudy. The inclusions of a diamond almost create a finger print making every diamond unique and generally do not affect the structure of a diamond. Large inclusions have the tendency to affect how the diamond reflects and scatters light. Some inclusions are easily hidden by the setting, others can be seen by the naked eye and some are barely visible under 10x magnification.

Even though there are multiple clarity grades diamonds, they all fit into one of two categories. A category with inclusions that can be seen by the naked eye and those that can’t. Clarity grades I1, I2 or I3 have inclusions that are visible without magnification. On the other side, SI2 and higher generally will not have an inclusion that can be seen by the naked eye. The "cleaner" diamonds are rarer and a "flawless" graded diamond would have the highest value. To education yourself further on diamonds and the 4 Cs, click here.

Did you know that diamond vendors have attempted to enhance diamond inclusions by laser drilling to remove black carbon inclusions and fracture filling to make small internal cracks less visible? The US Trade commission requires that those treatments are disclosed to the consumer. Windsor doesn't bother even carrying them due to complications and the appearance of even masking a diamond’s flaws. It’s easy to assume that inclusions "aren’t good" when you view a diamond’s certificate, we believe that some natural inclusions in diamonds can be quite beautiful.