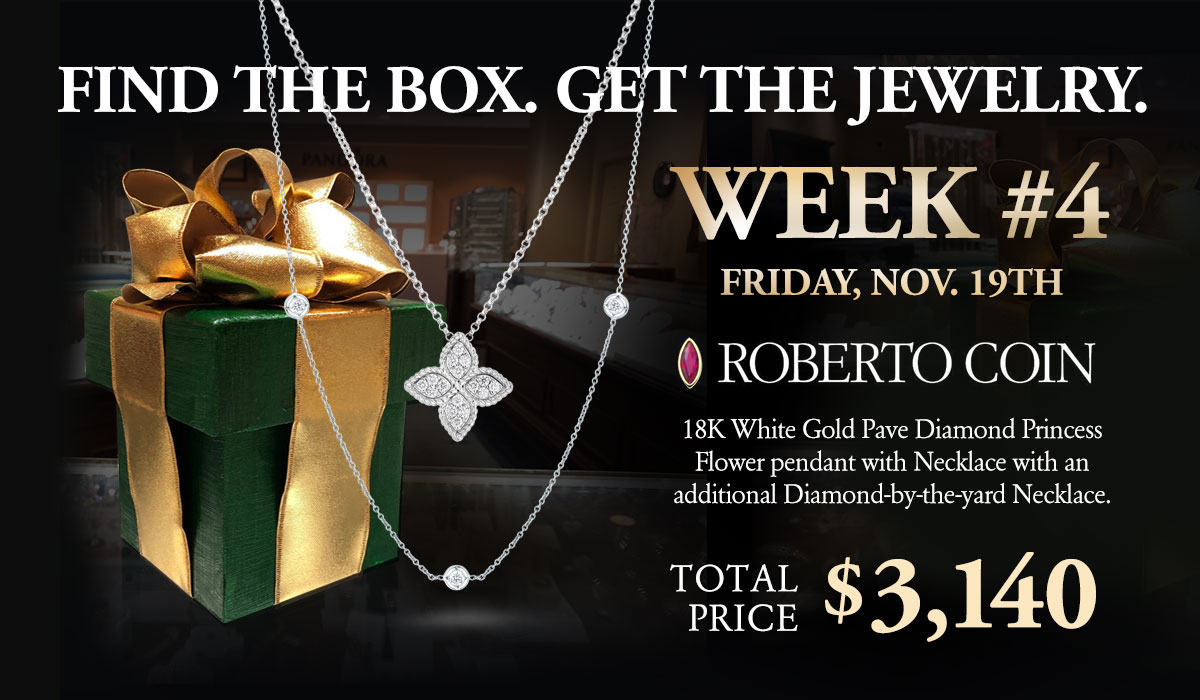 We're at Green Box #4 and this week we are featuring the Italian designer, Roberto Coin. The box finder will receive an 18K white Gold pavé diamond princess flower pendant with necklace with an additional diamond-by-the-yard necklace. Roberto Coin features a timeless and sophisticated look with each piece fashioning a hidden small ruby that rests against the skin.  This tradition comes from an ancient Egyptian legend that the ruby, if held against the skin, promotes long life, health, and happiness to the wearer. See some of our Roberto Coin collection online. We will release a clue every day until the box is found, but if you stop by the store and try on a piece of Roberto Coin, you’ll get a clue a day in advance. Happy hunting!

The Rock House has long had a history of paranormal activity. One of the investigation reports states that the pony tail of one the investigators was tugged as well as hearing marbles rolling in the attic. Of course there were voices and typical haunt experiences, but those two factors seemed unique to the Rock House.

Of there are windows on each side of the home but from the position of this box, at the base of a large tree, one can only see 4 windows of the rock house. The Rock House is the oldest stone residence in Georgia. It was modeled after New Jersey stone houses when it was built by Wrightsboro Quaker Thomas Ansley. It took Ansley over two years from 1783-1785 to complete the structure. It's walls are two feet thick and the interior contains a parlor, bedrooms, an attic, and a raised basement. It is currently owned by McDuffie County and is on the National Register of Historic Places.

Though he didn’t bear arms in the American Revolution, Ansley served as a forager and drover for the Army.

#4 Clue, Monday Nov. 22nd :: One that survived the afternoon terror.

The Great Tornado (Type 5) Entered McDuffie Co at RR Mile Post 42 at 12:45 PM March 20 1875. The Rock House Lost windows , a Cookhouse, corncrib and Gin In the Center of the Cemetery a Giant old Oak was Blown over This Marker is in the center of the Tornado’s Path. It's believed that some of the family cemetery headstones were broken from the 700 yard wide vortex path. The Storm had crossed Sixteen Miles of McDuffie County, killed Two people and destroyed numerous Buildings and property.

Also, if you want to learn more about the game or haven't signed up for the daily clue to be sent you, you may do so here. Please, note that only the first clue of the week will be posted on our social media. Visit Windsor Fine Jewelers today at 2635 Washington Rd, Augusta, GA 30904 or call us at (706) 738-7777
Posted in: Green Box Season 5
Categories
Recent Posts
Archives
Compare Products
Compare
Clear All
You have no items to compare.
My Wish List
Last Added Items
Go to Wish List
You have no items in your wish list.