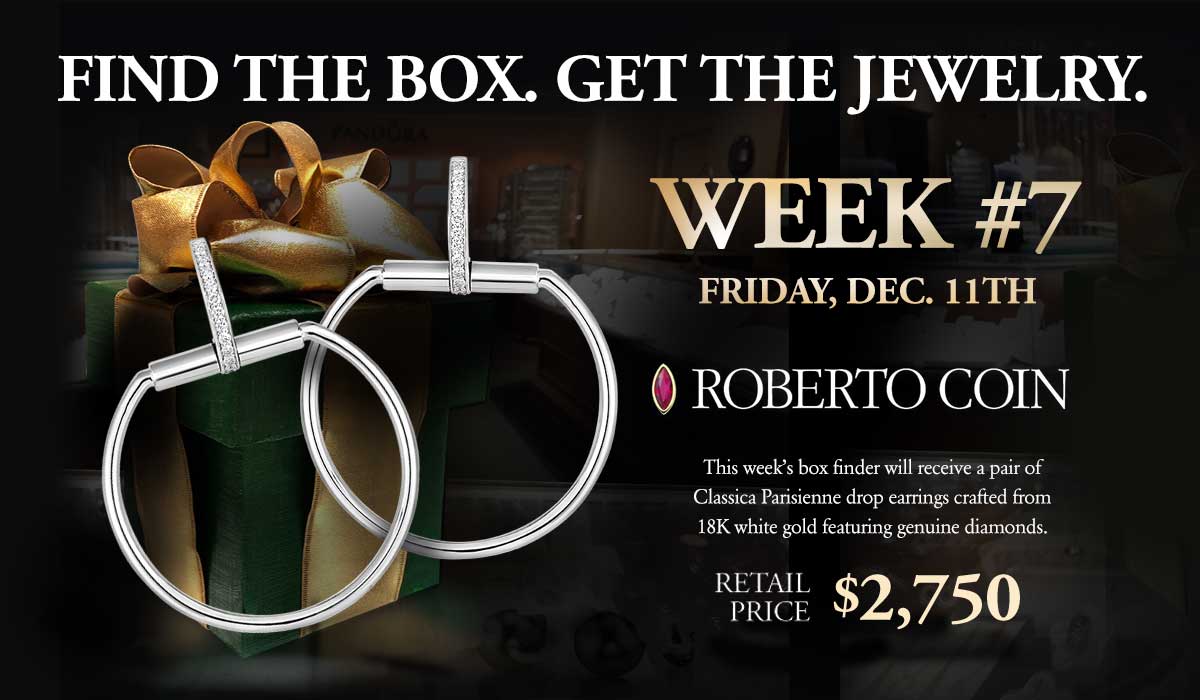 We're at Green Box #7 and this week we are featuring the Italian designer, Roberto Coin. The box finder will receive a pair of Classica Parisienne drop earrings crafted from 18K white gold featuring genuine diamonds. Roberto Coin features a timeless and sophisticated look with each piece fashioning a hidden small ruby that rests against the skin.  This tradition comes from an ancient Egyptian legend that the ruby, if held against the skin, promotes long life, health, and happiness to the wearer. See some of our Roberto Coin collection online. We will release a clue every day until the box is found, but if you stop by the store and try on a piece of Roberto Coin, you’ll get a clue a day in advance. Happy hunting!

Lafayette Race Course was one the best horse tracks in the country and was located Augusta, GA. One of the “fastest horses ever run” made national news here in Augusta on April 12, 1836. Col John Crowell brought the horse, John Bascombe, up from Alabama to race the horse Argyle, who was the favored horse to to win the 4 mile, 4 heat race. After defeating Arygle with Blazing speed of 7minutes and 44 seconds John Bascome headed to north for the race of his life, against the north’s incredibly fast horse named Post Boy. Bascombe is notable for giving the South a victory against Post Boy, owned by a New Yorker, in the North-South race at Union Course racetrack in Queens, New York. At the Jockey Club dinner following the race, Northerners baited supporters of Bascombe into accepting a rematch. John Crowell refused and retired Bascombe to stud. Isaac Dyckman wrote the following poem based on the North vs South race. 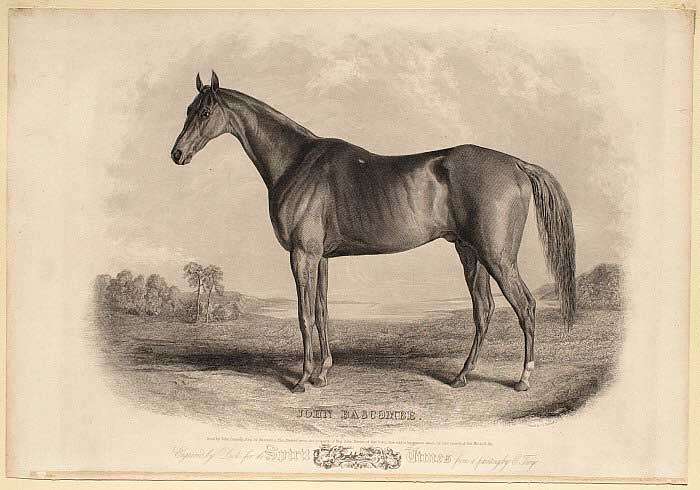 The horse John Bascombe was named after a methodist preacher from Alabama and the other horse was named Argle, which is typically a pattern of diamonds. Argle was the favored horse in the race. “Never was disappointment greater than when the race came oiff, for Argyle was distanced in the first heat. His backs charged trickery on the other party asserting that they had obtianed access to Argyle’s stable the night before and bled him nearly to death.”

#3 Clue, Sunday Dec. 13th :: Competitions of the past were nearby, but this box rests near where competitions continue.

The Lafayette Race Course was near 100 acres and it was southwest portion of Augusta, we chose a nearby public community/recreation center (WT Johnson Community Center) as a location that we knew the box wouldn’t be disturbed. The eastern border Marbury Street (12 Street), Northern border was Turnkett Springs Road (Wrightsboro) the southern border was Millidgeville Road (Martin Luther King Jr.) Western border went past McKinne (13th also isn’t there) to Augusta Ave. 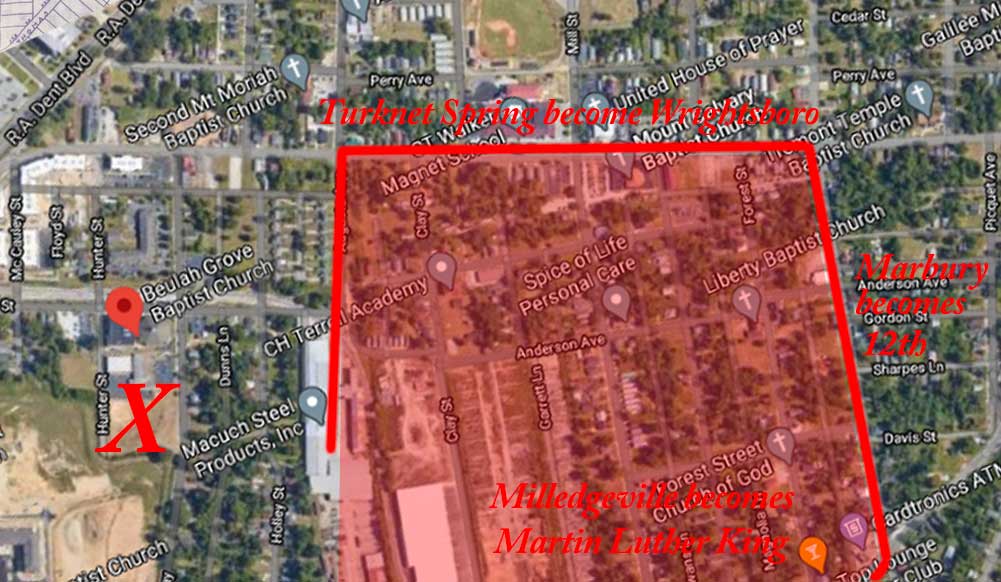 #4 Clue, Monday Dec. 14th :: So confident that he brought carrier pigeons to send word to Columbia.

According the book Random Recollections of Long Life 1806-1876, the owner of Argyle brought carrier pigeons to the race in a Augusta to convey the news of the results to Columbia in the least possible time. Yet, the race wasn’t even close, according the American Turf Register and Sporting Magazine “…the general belief is, that had he been in the best order he could not have made the time - 7m 44s.”

News spread very quickly of Arygle’s defeat and John Bascombe made the walk all the way to New York to race the Northern champion Post Boy on his home turf. The journey was a celebrated one, people came out to see the legendary horse as they came through the towns all way up to New York. The 7:44 was the victory time.

One the very few references for “Lafayette Race Course” is the selling of a tract of land from Beulah Grove Baptist to Laney Walker Development in 2018, they own multiple tracts in the area. Directly behind Beulah Grove main facility is W.T. Johnson Community Center, from the Augusta Parks and Recreation. This facility has a gym and baseball field. The Green Box was located at the end of Hunter road running down the side of the facility.

The location the race course was confirmed by the sale of the race track to from HH Steiner to D.B. Dyer under the Jarvis (which was purchased with other tracts of land) in 1890 to built an electric street car line up Walton Way and down Central Avenue. 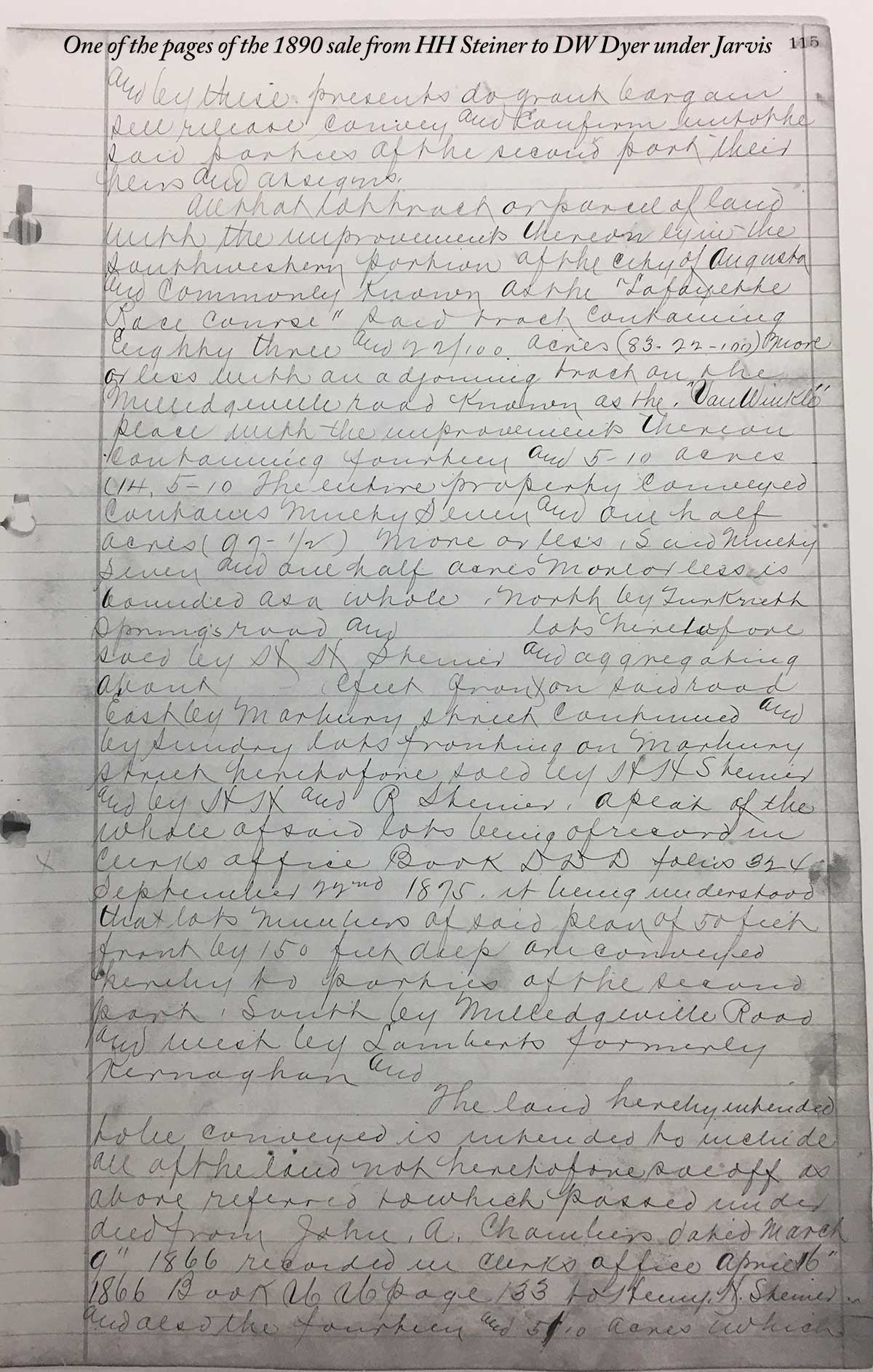