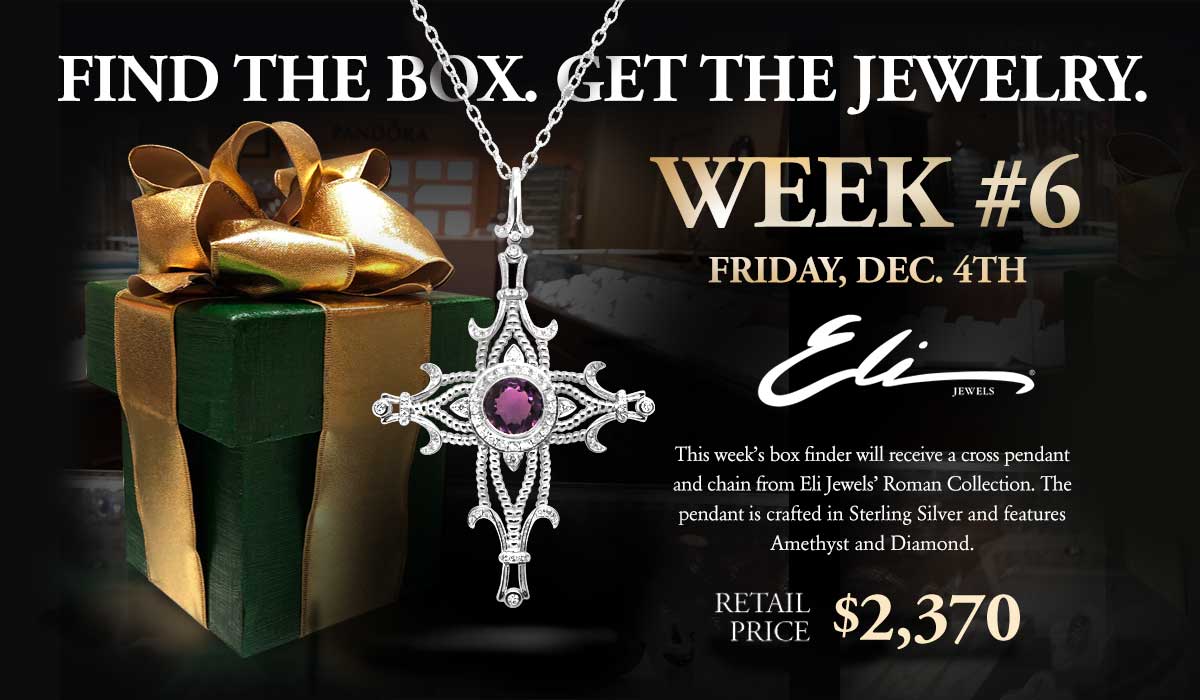 We're at Box #6 and this week we're featuring Eli Jewels! The box finder will recieve one of his beautiful pendants with chain from Eli Jewels’ Roman Collection. The pendant is crafted in sterling silver and features amethyst and diamond. Eli Jewels uses a contemporary spin on the designs of the Etruscans, Romans and the Greeks. One the brand owners, Fred Makhlouf loves Windsor and Augusta. He’s spent holidays with the Windsor family and been a helping hand to set up for Thunder Over Evans for many years. We will release a clue every day until the box is found, but if you stop by the store and try on a piece of Eli Jewels, you’ll get a clue a day in advance. Happy hunting!

Update...this box has been found

John Henry “Doc” Holliday had a love affair with his first cousin named Martha Ann “Mattie” Holliday. Mattie was the eldest daughter of Robert Kennedy Holliday and Mary Anne Fitzgerald. Although romantic relationships and marriage between cousins was common in the nineteenth century, Mattie’s devout Catholic parents wholeheartedly disapproved. Although her parents blocked their relationship, they corresponded by letter for many years.

When Doc left Georgia in 1873, Mattie Holliday was distraught after separating from the only man she truly loved. John’s farewell to Mattie surely was an emotional time. Mattie would always miss her John Henry and never married. There would be no other man for her. In 1883, Mattie decided to enter the Sisters of Mercy Convent at Savannah, Georgia to become a Catholic nun. As Sister Mary Melanie she would become an elementary school teacher. Mattie sent a note to her cousin John about her decision as follows:

“My Dear John Henry,
I am sure that you will feel no more shock than I at the prospect of my becoming a nun and I expect that I will be the oldest novice in the country. Be that as it may, I have a new beginning, a new life. My work for the Lord will not keep my love from you. It will, however, be a love from my heart only. My feeling and caring for your well being will remain the same. Our past will always shine bright in my memories, dear cousin. I am well aware that you do not carry the same religious fervor that I have inherited from mother. I know that you are good John Henry and perhaps one day you will come to see the Lord as I do. In the meantime, I shall pray for you every day and be with you in spirit.
God bless you, John Henry.”

In later years Sister Mary Melanie became Mother Superior in the Sacred Heart Convent in Augusta, Georgia. By the time of Doc’s death in 1887, he had been away from Georgia for fourteen years. Among his worldly possessions was found all of the letters that he had received from his beloved cousin Mattie. The return address on those letters was used to send his belongings to Mattie even though John’s father and immediate next of kin was still living. Mattie in turn also kept Doc’s letters. She was the one who received the notice of John Henry’s death. Mattie, in turn, relayed the information to the rest of the Holliday family.
Martha Anne “Mattie” Holliday died on April 19, 1939 at St. Joseph’s Infirmary in Atlanta, Georgia. Among her possessions that were given to her sister were most of the letters she had kept which were sent to her by her John Henry. Mattie’s sister burned all of the letters so no one was able to read them. However, Mattie had burned some other letters before she died so no one could ever see them.

According to old Holliday family stories, the young romance between Doc and his first cousin really happened – and may have been one of the reasons he left Georgia. The girl was Martha Anne “Mattie” Holliday, daughter of Doc’s uncle Robert Kennedy Holliday. Doc (then just John Henry Holliday) grew up in the little city of Griffin, Georgia, while Mattie grew up in Jonesboro, thirty miles or so up the road. Although the families were a bit separated in those horse-and-buggy days, they gathered together whenever they could, often at the home of Doc’s medical doctor uncle, John Stiles Holliday, in nearby Fayetteville. Mattie was eighteen months older than John Henry, but the two were close as children and remained close – and reportedly even had a romance when they were teens.

Doc Holliday shot many people in his life, almost all of them in self defense. His habit was to aim for his assailant’s shooting arm which both disarmed and inflicted a wound that, while painful was not fatal. This clue could have accurate in two ways, one being disabling a firearm (arms) and the other as actually disabling the human arm.

Martha Anne “Mattie” Holliday died on April 19, 1939 at St. Joseph’s Infirmary in Atlanta, Georgia. Among her possessions that were given to her sister were most of the letters she had kept which were sent to her by her John Henry. Mattie’s sister burned all of the letters so no one was able to read them. However, Mattie had burned some other letters before she died so no one could ever see them.

We didn’t want to put the box near church/cultural center. So this box like Doc, was at a distance, yet he knew where she was, this box was across the parking lot at the base of the Calhoun Expressway.